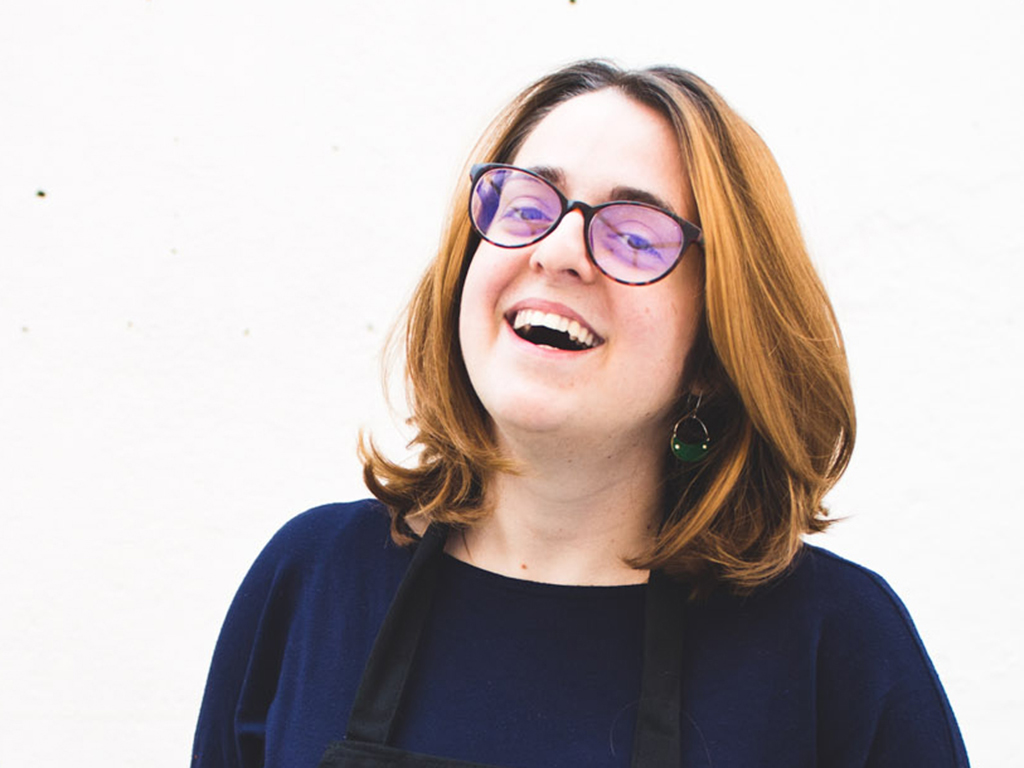 I have worked in a gallery-bookstore, in a center for medieval studies, in a graphic design studio that also sold popcorn machines, served food in restaurants wearing white gloves, etc. Lately, I’m spending time at Espai Brut, an illustration and engraving workshop. We do courses, we have a gallery and a store of graphic artwork.

— The story of your first paid art commission

It was the graphic campaign of a youth theater in Vienna, where my sister worked, it was huge for me. I learned a lot from those commissions since my sister guided me, doing the artistic direction. I learned that I have to be fast, resolute, not to get attached to the images I drew because corrections can come at any moment. When I finally visited the theater and watched the play, I was amazed. From a distance, you don’t realize exactly what you participated in.

— The best professional lesson you have learned

— Other artistic disciplines that influence you

I feel influenced by literature, I grew up surrounded by my mother’s poesy in a world of writers and artists. I also learn a lot from the emotions of the music, but I believe nowadays cinema and animation are the ones that influence me the most.

I enjoy the whole process of graphic printing on paper. I like to know different traditional printing techniques, that’s why I explore engraving. It allows me to get dirty and experiment.

The digital tools give another result and I also enjoy how fast I draw with the tablet, one has definitely more control over the whole process.

— Describe yourself in three words

The sea. The underwater world that we don’t know fascinates me.

Sleeping outdoors for the first time. My grandfather telling us stories, there were fireflies and crickets, the stars didn’t fit in the sky and felt.

Diving. To travel more. No fears.

** Subscribe by August 31 to get an exclusive letterpress print by Ina Hristova.**

We have talked about having amazing walls here. After our two first editions, we’ve been thinking a lot about frames. Many of our subscribers have written us asking for tips on this subject, so here we go!

We love the old-school frame stores where you can choose everything from zero, but let’s be honest: modern life has brought easier and cheaper ways to frame. And if you want to have dynamic and creative walls, you’ll have to be practical.

Many stores offer a vast catalog of frames with a wide range of prices, styles, and materials. Quality is one of the most important aspects to focus, so try to always choose the best ones that can fit your budget.

We started our hunt for Soldier’s Tale and Siamese Collage frames putting all these concepts together and most of all, thinking about what each image need:

-> The Soldier’s Tale is a mix of a classic illustration from the 30’s with a modern intervention. We thought that the modern part should stand out, so we needed a frame that highlighted this part of the artwork.

-> The Siame Collage is actually a visual game that offers almost 100 possible combinations. As it can (and should) change from time to time, we wanted a very-easy-to-assemble frame.

This was our shopping list and where the fun started. After some search, we ended up with the PERFECT solution for both of them at the same place.

We’re big fans of Habitat, they have beautifully designed products, a wide frame collection with great quality at a fair price (many ticks on our wish list at once!!!), and that’s where we found our perfect frames. The best part is that it was sales season and we’ve got them with 50% off.

For the Soldier’s Tale, we chose the Bacall collection, made of black and clean metal, very elegant and discreet. 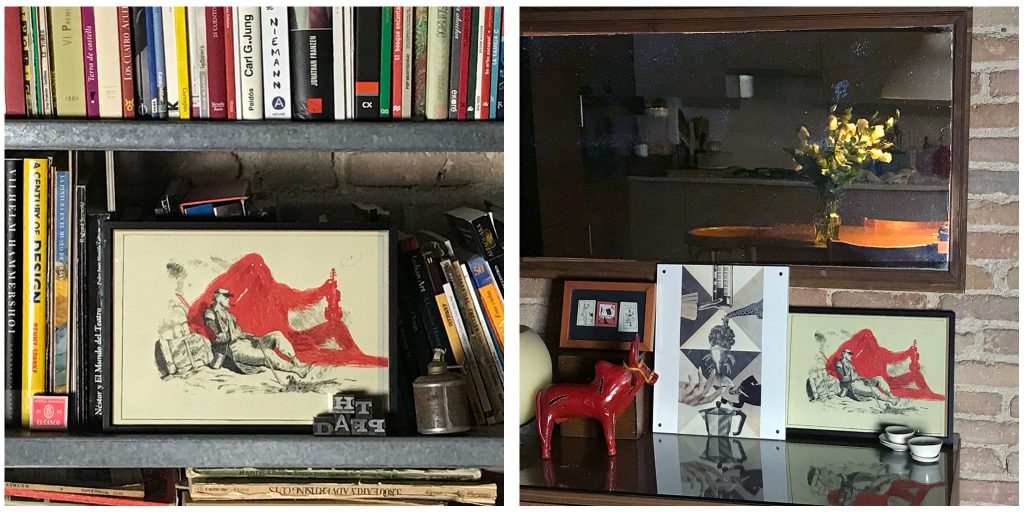 And for Siamese Collage we chose the magnetic, that will allow us to change the combinations whenever we wish to, in just a few minutes. 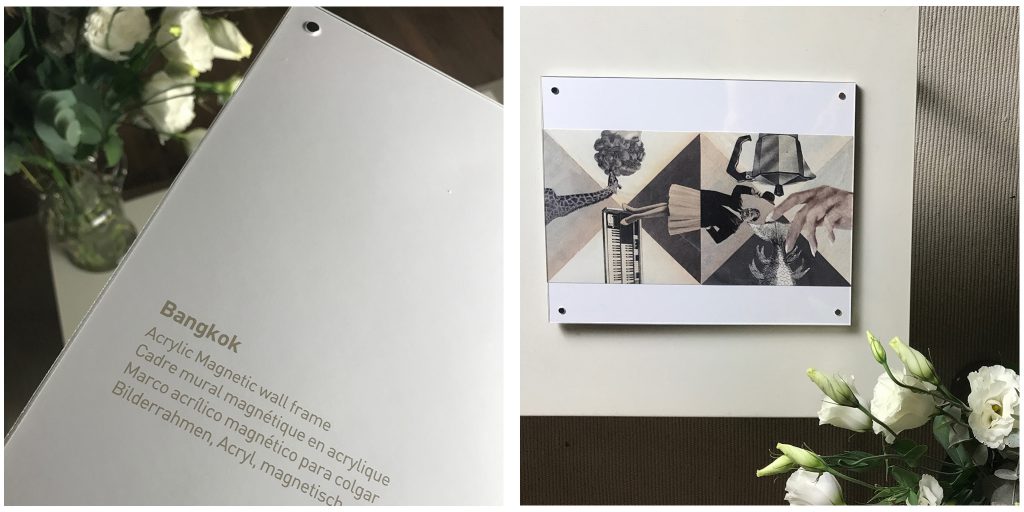 P.S.: What if you leave the frame on the coffee table

to be easily handed and renewed? 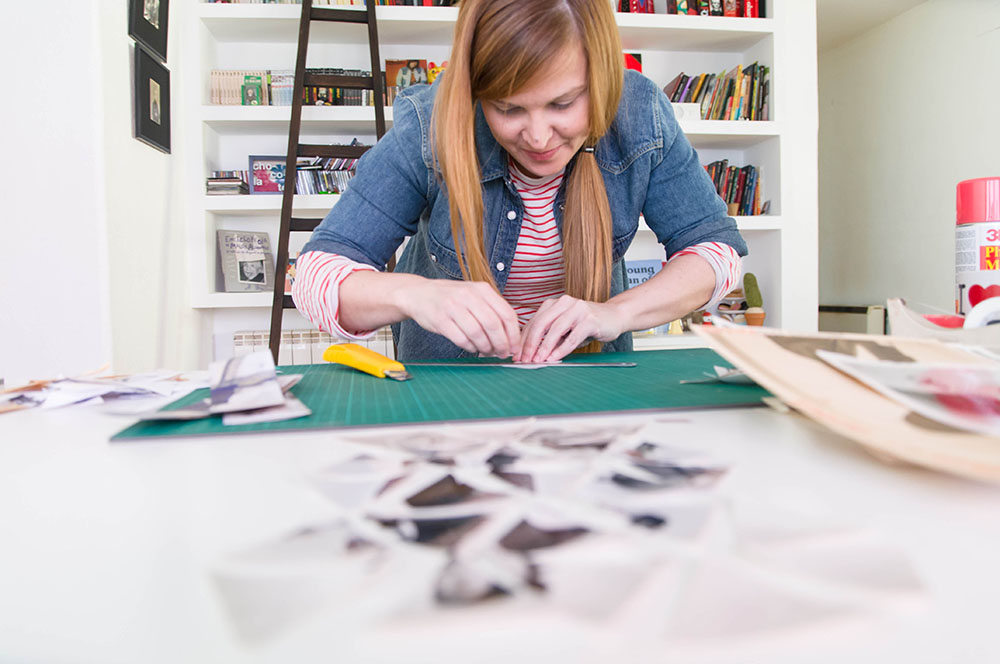 I’ve always been a graphic designer.

— The story of your first paid art commission?

It’s very difficult for me to separate my work as a designer and illustrator of the artistic part. Things get mixed up and projects come in some non-standard ways. So I really don’t know what my first commissioned project could be.

— The best professional lesson you have learned?

— Other artistic disciplines that influence you?

— Describe yourself in three words?

I’d love to get a Valentine’s postcard from Marian Bantjes.

The Lobster by Yorgos Lanthimos.

In my mother’s lap.

— A memory of childhood?

Hiding under the table cloth to listen to the conversations of the adults. 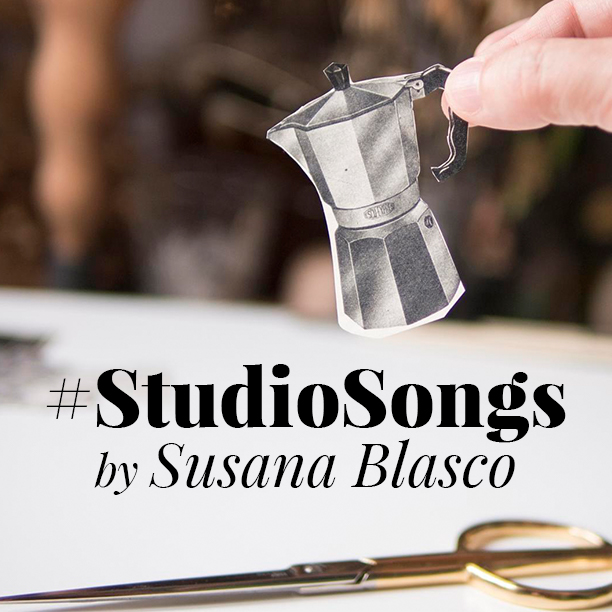 BIG TIME! We’re opening our Spotify with Susana Blasco‘s top 10 list to boost your creativity and to make you good company during the long journeys at work.

An amazing musical collage with only the best of all times.

Know what? You may not like it, but… we spend around 9 hours and 19 minutes a day at work. Too many hours if you’re not in the mood, right?

It gets worse when the words “office” and “gray” walk around together. We really disapprove the gray offices, that’s why we prepared this guide for colorful and happy working spaces, that could also be called our second house.

A study by the University of Texas says that offices in gray, beige or white bring out the sadness and depression of workers. So put bring up the colors! Not only will you be happier, depending on the color you will also get better results.

For example, painting the walls in blue will help you concentrate more. Green will calm those nerves. Yellow is connected to the muse of creativity. Finally, red will accelerate your heart rate, your energy, and your productivity. 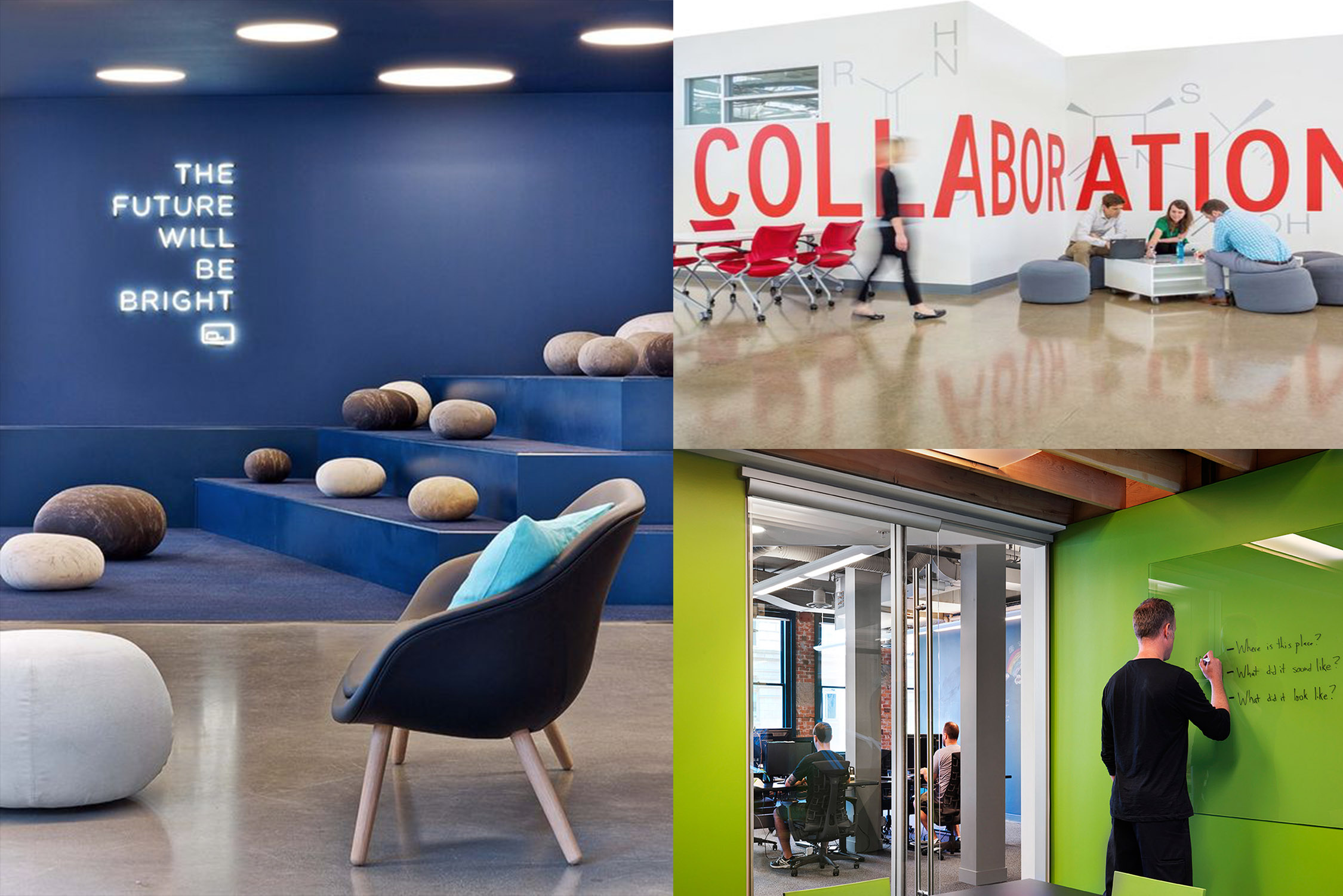 Another American study – as usual! – claims that workers exposed to natural light sleep more, are more likely to make physical exercise and live better. Of course, not to forget that they also WORK better!

Not that we want you to feature at Forbes, but get away from the fluorescent and open up the curtains. Your company will be much more productive and, above all, happier. J

Plants bring life and good vibes. They clean the environment both physically and emotionally, reducing stress and improving working relationships. Hey! It’s not said by us. It’s a study by the super-smart-Australians. 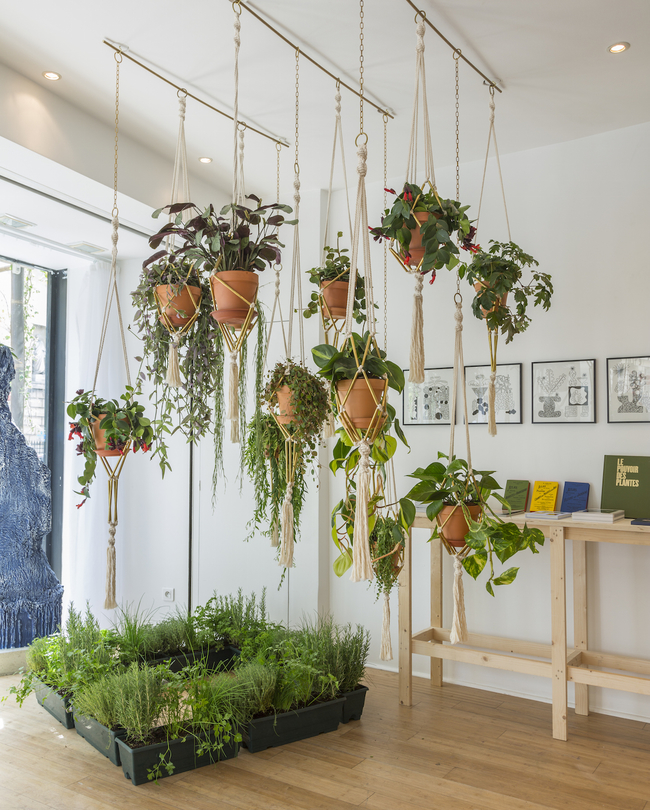 Now that your office is full of colors and light, give it that personal touch! Decorate it according to the personality of your company (optimistic, fun, young, artistic …) but also give the workers a chance to add their touch. Welcome posters, photos, own creations, memories. The “Home sweet home” kind of thing.

As said by many, for a business to thrive you have to think out of the box. And let us tell, my friend: improve the decoration.

Walls transformed into mood boards, lamps that are fish tanks or, a much easier idea, Le Timbre exclusive collections!

Say goodbye to the working spaces that never change. Getting a new print every month will cheer up your walls and most of all, your boring routine.

Wrapping up: take good care of your office or studio, so the 9 hours and 19 minutes you spend there will not look like a B&W silent movie. 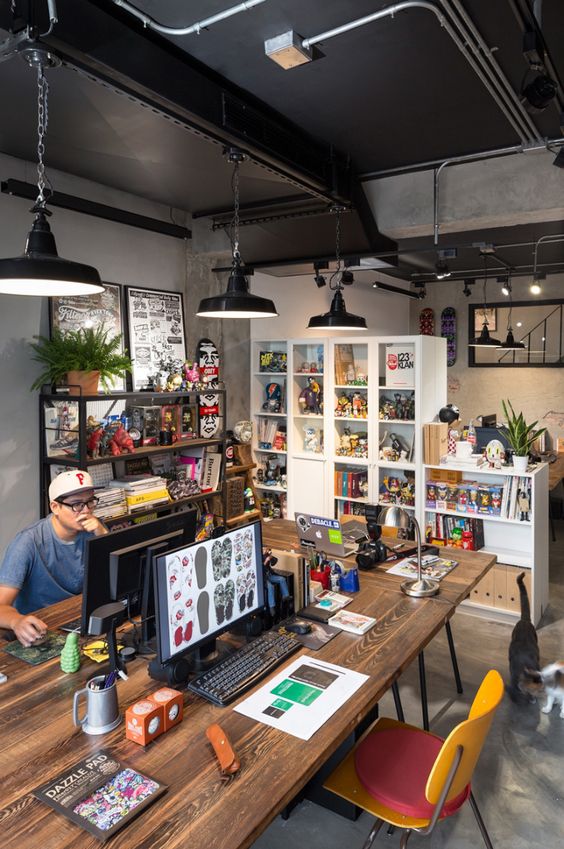 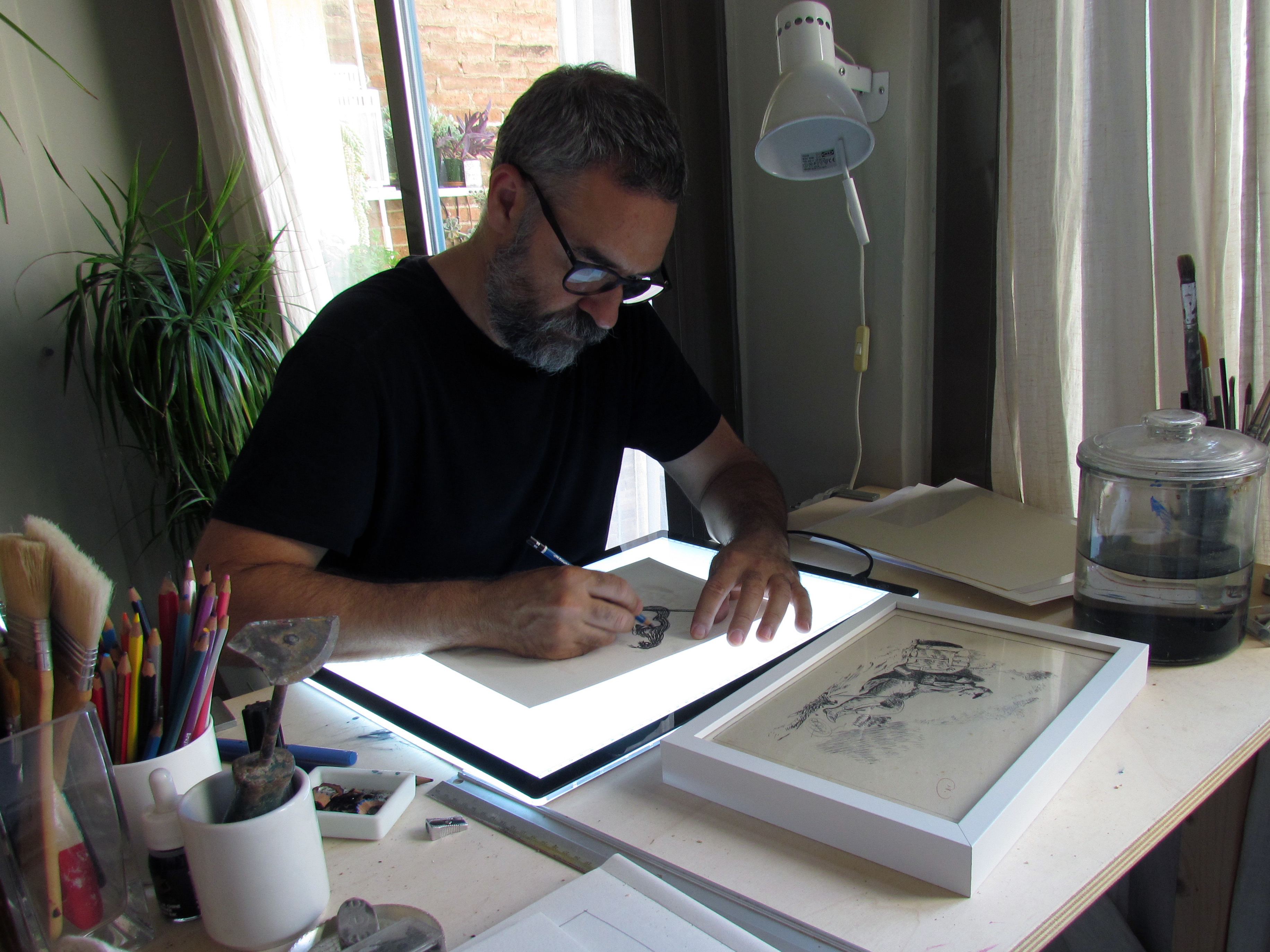 — The story of your first paid art commission?

— The best professional lesson you have learned?

It’s all worth it if the intention is right.

— Other artistic disciplines that influence you?

— Describe yourself in three words?

At this very moment, one by Ian McEwan.

One from Ian McEwan.

Under a hot shower, after coming back home walking on a rainy day.

Walking the dog in the woods.

— A memory of childhood?

The exact space between the trampoline and the water.

— 3 requests to the genie of the lamp. 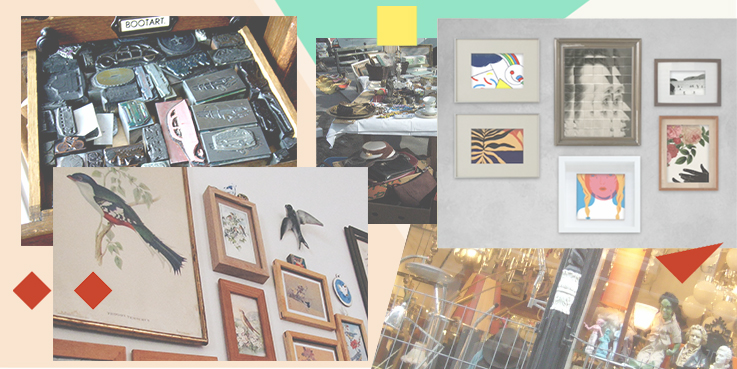 Decorating is a way to tell stories and transform our living and working places into amazing mood boards. The walls around us should be filled with joy. We can use them to tell stories, to bring memories back, to make us laugh or simply to bring some beauty to the world.

On walls, only frames. WRONG! Try to mix the traditional framing with other ways to hang your prints. And why not mix them with some other objects? Be a rule breaker: more diversity, more fun.

Flea markets are great places to find unique decoration treasures at very reasonable prices. It may take patience, but nothing equals the pleasure of giving old objects a new life. Give it a chance and become a treasure hunter

>> Friendly advice: if you suffer from allergies, take a mask with you and be brave! ? <<

The value of objects should be on the meaning they have. Bring back your childhood memories, put together your favorite black and white pictures, make your gramma a tribute and give your old memories another use.

Don’t be afraid to get too sentimental and use your walls to tell the story of your life.

Define a concept and create a group of images and objects to define it. For example, you can communicate freedom by filling a wall up with birds. Be guided by literacy or create another code, such as color or form groups.

Let your walls communicate your feelings.

#5 | Be democratic & spontaneous. Make it dynamic!

Decoration can (and should) change from time to time. Make it seasonable, or let it follow your moods. Have some extra sets ready and give them the chance to see the light. Buy frames that are easy to assemble, allowing an easy renovation of content.

<< HEY! Let us help you make your walls blossom! Become a subscriber and get an exclusive & limited edition print every month >>

Hi! Bel Lepikson speaking, founder, and curator of Le Timbre. Here my team and I will be talking about creation & creators, but first, let me explain how everything started.